This week I stopped at the Cryptologic Museum  and got to see a few QRP rigs as well as actually touch a WWII Engima Machine.  It was raining while took a short tour.  There were several people working on a new PR video for the museum and one of the people who was there to be interviewed gave me a quick talk on the 'Engima', the US counterpart called 'Sigabra' and the Japanese 'Jade' machine. 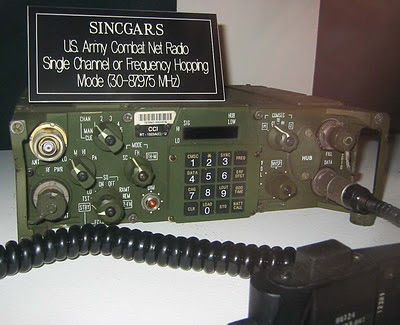 SINCGARS Tactical Radios. Top unit is SINCGARS ASIP while bottom unit is SINCGARS ICOM, in vehicle mount rack.
SINCGARS and SINCGARS-compatible radios have been a core component of U.S. military tactical communiations since the 1980s. The version table on this page shows many of the models that have been issued to Army, Marine Corp, Navy, and Air Force units but more have been and will be fielded to provide interoperable radios with different configurations. Suffixes are added to existing model numbers or new nomenclature is created when functional changes are made. There is also a large complement of auxiliary equipment for functions such as encryption and frequency hopping code generation, key loading and management, power supplies and batteries, mounting racks, cables, antennas, switching, interop and retrans, and much more that can be found in the SINCGARS manuals.
The KY-57 is the man portable ground equipment and is only contains the voice encryption function so it needs to be used with a radio or wire line.

Note that the classical KY-57 uses a digital data stream at 16 k bits per second and so needs  what's called a wide band radio channel.  This is why military radios have 25 kHz channel spacing whereas commercial plain text radios use a 5 kHz channel spacing.  Becasue of this need for bandwidth the VINSON system will not work on H.F. radios, only VHF and UHF wideband radios.

The Frequency hopping aspect of radios like the SINCGARS and Have Quick makes it difficult for an enemy to get a bearing on a transmitter, but does not provide secure voice transmission.  That's why these radios either use a KY-57 or KY-58 or have an equivalent function built-in.

The KY-57/58/67 support OTAR, Over The Air Rekeying.  This can be done once the KY-57 has a Key Encryption Key (KEK) loaded in variable slot 6.  The new dkeys are transmitted in the clear as Black keys and converted into Red keys by the KEK as they are loaded into the slots.  Note the KEK can not be sent over the air and needs to be loaded locally.
The PRD-1 is an H.F. receiver designed for direction finding.
It can be mounted on it's special tripod (included in this auction)

or using a special mount that allows leveling of the radio,

on the fender of a jeep like the willys Jeep or M38A1.(check other auctions),

was the workhorse during the Vietnam War for determining from what

It could pick up continuous wave, interrupted wave, frequency-modulated (fm)

and amplitude-modulated (am) signals and, by rotating the antenna

to determine w the maximum pickup was obtained, home in on

R-395/PRD-1 Receiver Covers 100 Kc to 30 Mc with High sensitivity
n 1943 , the Americans and British together a Combined Cipher Machine (CCM). The British and American Typex SIGABRA could thus send messages to each other. Although the British Typex does the Americans showed, the Americans refused their machine to the British show. The CCM was used by the British Navy in 1943 . The CCM represents an improvement for both the U.S. and Typex SIGABRA .
Typex 22 (BID/08/2) and Typex 23 (BID/08/3) were late models include plug boards for even more security.
It is estimated that by the end of World War II more than 12,000 machines were produced Typex.
The Typex machines remained in use until the seventies. In 1973 the New Zealand government stripped away from the last machine.
n cryptography, SIGSALY (also known as the X System, Project X, Ciphony I, and the Green Hornet) was a secure speech system used inWorld War II for the highest-level Allied communications.
It pioneered a number of digital communications concepts, including the first transmission of speech using pulse-code modulation.
The name SIGSALY was not an acronym, but a cover name that resembled an acronym—the SIG part was common in Army Signal Corps names (eg, SIGABA). The prototype was called the "Green Hornet" after the popular radio show The Green Hornet, because it sounded like a buzzing hornet— resembling the show's theme tune — to anyone trying to eavesdrop on the conversation.
Posted by Paul Gerhardt at 8:14 PM 1 comment: Links to this post

For the last few weeks I have been riding the motorcycle over to Lovettsville, VA and Harpers Ferry WV to visit family and help my son work on his truck.

Posted by Paul Gerhardt at 11:44 AM No comments: Links to this post

HW-7 Versus HW-8 a Subjective Face off


Back at the end of '08 I purchased both a HW-7 and a HW-8 to compare the DC receivers to the Willamette20 that I was constructing at the time.  I had tried them briefly but not head to head.  The HW-8 is going to be traded so before packing it up I thought I would test it for the next person and then I decided to put the HW-7 on the test as well.

These are some very unscientific findings based on yesterday's test.  The test setup included a Cuschcraft R7 vertical which is more or less tuned to CW frequencies, an Oak Hills QRP wattmeter and a Heath IP-18 regulated supply which is only rated at 500 ma so may not really be quite large enough.

The differences in the rigs include the the addition of 80M in the '8' in exchange for the crystal option on the '7'.  The other main differences are improvements in the receiver which manifest themselves as increased sensitivity and less microphonics on the '8'  There is also improved resistance to broadcast interference.  I owned an original HW-7 in 1972 or so that I built and used fairly often for several years and don't remember the broadcast interference but then again I usually used indoor dipoles tuned for one band rather than the R7 multiband vertical.
Anyway by careful tuning of the preselector knob I could still get readable signals with the '7' but it does not have the sensitivity of the '8' which has an RF Gain control.  The '7' though actually had a nicer CW 'note' (IMHO) than the '8' though with a good signal tuned in.  The sidetone however sounds much cleaner on the '8' vs a rather harsh sounding sidetone on the '7'.

I have made maybe 50 or so QSO's with the Willamette20 now and it is a much better rig in some ways on 20M but of course you don't have the multiband option of the '7' or '8'.  The receiver in the Willamette20 is better than the '7' for sure and it sounds better than the '8' audio wise.  The tuning on the '20' is different because it uses a variactor diode instead of a capacitor.  The 10 turn potentiometer on the '20' makes for a nice although not linear tuning rate.  The HW's have a more linear tuning rate and a calibrated dial that is actually fairly accurate although not in the way we are now used to with modern radios.

Either of the Heaths will net you plenty of QSO's at the one watt QRP level but the '8''s receiver is overall better in sensitivity and resistance to  Short Wave B/C interference.

The single Band Willamette20 is at least equal and probably better than the '8' in the number of signals it will hear.  The 20 has a beautiful sounding sidetone and very smooth all solid state semi break in as well as a relatively hefty 4.5 watt output.

In 1972 I purchased one of the 1st hundred or two HW-7's I ordered it new as soon as Heath was taking orders.  I lived in NC and built the rig and took it with me when I joined the Air Force in 1972.  Using a 15M dipole with 'clip lead extenders' taped to the WWII style barracks at Lowery AFB in Denver CO I made many contacts all over the world with the little rig.  Later on living 'off base' in a small house I was able to put a dipole up in the yard and continued to make contacts for several years.  This was my 1st QRP rig and getting another one was a trip down memory lane.  Later when the HW 8 came out I had been happy enough with the HW 7 that I did not think it would be worth buying another kit.  Well it is a step up as far as  the RX but I think I will keep the '7' 'just because'.

Another HW-8 on the way.

Columbia Amateur Radio Ass'n Hamfest at Howard Co Fairgrounds was last weekend and I took a ride over there on the way to some family visiting.  I met W3PO there and we got to visit and socialize some with some other hams that I have know for quite some time and they all seemed to be a lot older now.  I came home with some new connectors and purchased a new 'mini-mag mount' for the old Icom 24at that was pressed back into service with it's new battery from Batteries America.

Posted by Paul Gerhardt at 11:32 PM No comments: Links to this post

This is the QRP Labs QRSS Transmitter available from Hans Summers.  I purchased the kit at FDIM at Dayton and the tropical depression with 2 days of rain seemed like a good time to work on it.  Today I got the kit running on the bench still on 12 wpm with 36 ohm dummy load I am getting 5.08V p to p output on the scope.  This is somewhere around 50 mw and is set somewhat below max output as max output causes the transistor to run pretty warm.  I also found out that you can reverse voltage the PIC enough to cause a 2nd degree burn on the finger and it still seems to be working.  I am letting it run overnight or for a few days before I put the antenna on it.  Before it started working I had a bad looking sine wave at very low level. Also the final was amplifying this spurious signal.  After poking and prodding and reheating some connections it starting running properly.

Check the Yahoo Group on QRP Labs for info on this inexpensive kit.