Wiring Up an Aviation Headset Adapter for ICA21 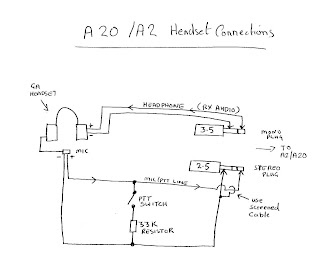 After years of using a Aviation Headset with a hand mic with the old Icom A21.  I finally purchased from SkyGeek  part number PA-81.  It worked except for the PTT so I had to open the mic jack and rewire it.  I used this drawing and got it back together.  It seems to be working with the radio.  Next will try it with the intercom.  This sounded good in the intercom but I received bad transmit audio reports on the air so I added a 470 pf cap at the mic element to see if it was RF getting back into the radio.  Will try it again soon. This is on a Sky Lite SL-800 headset that has an electret mic element.  One year later the resistor failed open and the PTT quit.  I redid it and played with the resistor values a bit by adding several 33k in series and trying it at 33, 66, 99k and there seemed to be an increase in audio level at 66k  and I redid it with a 100k so not to have to put 2 resistors in the little adapter.  The small cap seemed to help with RF getting into the audio in some cases.

Posted by Paul Gerhardt at 7:53 AM No comments: Links to this post