Bike Florida 2014
Getting on the train was not the best experience as Amtrak would not load my bike, so I boarded without it and watched it sitting in its box on the platform as train 97 pulled away. The train was already 2 hours late so it was 9:34 and past business hours.

In the morning I called Sun Cycles Shop and told them my dilemma, they texted the guys at the event and they called about 90 minutes later. When I arrived in Palatka FL I was asking for directions to start walking with my large 40 lb wheeled bag and overnight bag. Some told me they had come to pick someone up and take them to the Overturf Center and to throw my bags in the truck and jump in! They dropped me off at the Sun Cycle tent and I looked in to see only two bikes but one was tagged with my name! It was a nice blue Trek 1.1 Alpha. I had brought my own pedals and had them put them on the rental bike. Day One rides were 7.5, 29 , 53 and 70 as it was already 2pm by the time I got registered and staked out a place in the gym I did the 7.5 but rode around town and few extra times to get a feel for the rental bike. That evening the town had a street party with a blues band and car show. Bike FL also had a hospitality tent with refreshments downtown.

Sleeping in the luxurious “indoor camping” areas was better than last year. Again I took my binaural ambient sleep music to mask the noise and this year Trish bought me a nice sleep mask (last year I used a sock). The yoga mat and blanket added some padding under the Walt-Mart sleeping bag. To me the gym floors with a couple hundred people were much more conducive to sleep than the Amtrak coach seat in a moving train with 20 some stops between DC and Palatka. 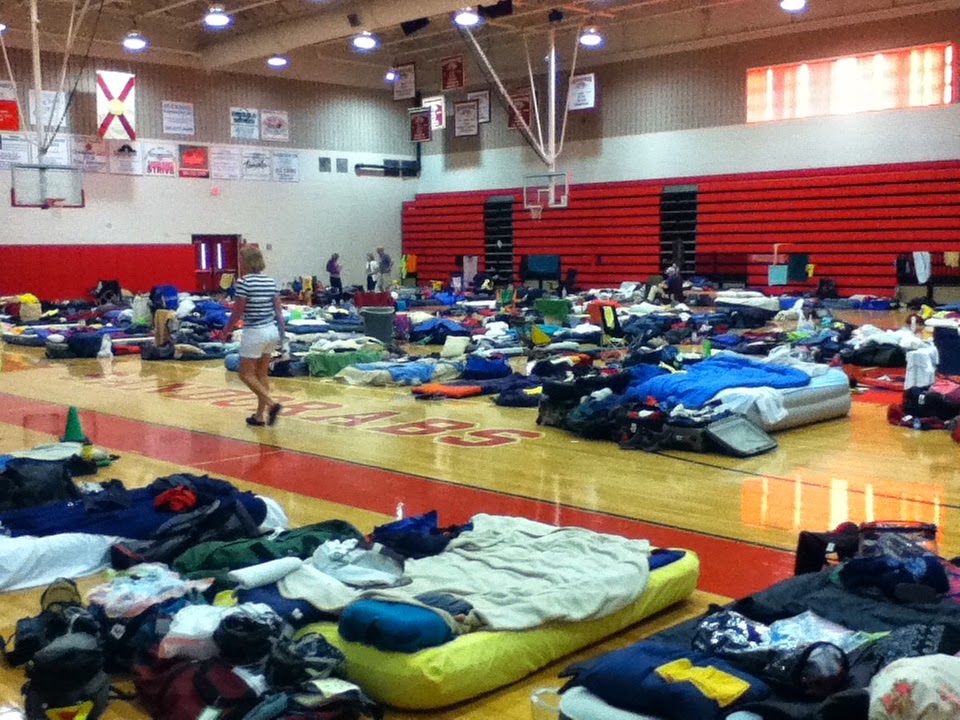 Next day I ride the shortest 35 mile route and find the rental seat pretty uncomfortable. Also the limited training compared to last year shows some but mostly the seat is painful! The WX is not quite as hot as yesterday but it felt great after a cold winter in MD. Back at the school, I decide to put my old Brooks seat on for the rest of the tour. In the evening I taught Yoga at 7:30 and it felt great to have the class outdoors as no space was provided for the evening class. The temp was perfect though and we finished the class under a clear sky full of stars. Off to sleep with the sleep mask and ambient noise sound isolation earbuds.

The lights come on at 6 am but I don't even notice them but I do sense folks moving about and I get up to eat breakfast in the cafeteria, pack and throw the bags in the luggage truck. As I have no lights I have plenty of time to get ready to take off on the 62 mile ride to We are riding to Daytona today and it was a nice ride even though it was way over my 25 mile or so max training ride this year. The old brooks saddle felt much better on the sit bones. In the evening there was talent show and I taught a Yoga class again for those that wanted to do that. This time the venue was a wrestling room which felt a bit strange with the soft had foam floor but was probably great for those that came with no yoga mat. It was difficult for balance poses as your feet 'sink in', one person complained of the chemical smell. Oh well....Tomorrow will be a local day and the WX guessers call for another nice day.

Today I don't even wake up at 6, when I finally peek out of the sleep mask and ambient noise it's nearly 6:30 and almost everyone is up and moving. I have only been waking up once to pee at 4 or so and sleeping well. I take off on the 25 mile ride to Daytona Speedway. At the speedway it is warmer and I take off the long sleeves and ride around the 2 mile track twice just enjoying the sights. The banked curves are much taller than one would imagine. The banking is so steep one needs to get on hands and knees to crawl up to the top. We were asked not to ride bicycles up past the yellow line. We stopped to take pictures and saw the victory circle, the pits and had pictures taken by the professional photographer covering our event. The Speedway was open to other bicyclists and human powered vehicles until 11am so it was great to have gotten there early enough to enjoy the track.


Rode back to the Seabreeze High school on the other side of the inter-coastal waterway. Some of the ride was on a bike path and it was very pretty, until a motorcycle pulled out and stopped right in my path. I hit the brakes and tried to swerve around but the bike started to slide so I straightened out and hit him in his left saddle bag. I called him several names such as DA MF and a few more and rode away. A few hundred yards later my seat felt funny, then I heard parts falling off the bike. I stopped at the base of the bridge over the intercoastal and upon dismounting the front 2/3 of the Brooks leather seat fell off! I took the safety vest and wadded it up as a pad and just set the piece of the seat back on and rode the final 4 miles or so back to the school. Back in the gym I changed to my casual shorts and shirt and headed back out to the Beach only blocks away.  At 4 pm there was the Bike FL beach party and I stayed for a while but missed the bonfire as I went back to teach Yoga again.

Today would be a “travel day” of about 60 miles with the added bonus of a 17 mph direct headwind all day, maybe increasing. Today I was glad that I was riding without a cyclometer. All I could do was ride into the wind. My new friend Bill had reminded me that “that is what gears are for” Nancy and I rode together as she was going 'my speed'. Seeing the wave and the beach much of the time was very scenic but was offering little protection from the winds and sometimes was riding in the 2nd to the lowest gear for long periods, if we went behind a building or high dune I could up shift a cog or two but then a gust would hit and I would have to downshift again. Stopping at all the rest stops for 10 min or so we finally made the Oasis restaurant south of St. Augustine and stopped for a nice Fish Taco. After about 45 min or so we took off again and finally made it to the Solomon Calhoun Center which would be our home for two nights. Again there was no assigned place for the PM Yoga class but it was not too cold to have it outside next to the baseball field on the grass behind the outfield. Layover rides were 45, 60, 100. I choose to ride to the 1st rest stop on the 45 mi ride which was right up the beach but the wind was more of a direct x-wind with a slight downwind component on the way out and slight headwind on the way back but nothing like yesterdays grueling ride. Back in St. Augustine we bought lifetime senior passes for National Parks so we could visit the famous Fort “Castillo de San Marcos” and walk/ride around downtown St. Augustine for several hours. Later we went back to the center for a shower and took the shuttle bus back downtown to the “Fountain of Youth” in time for the last Planetarium show and 20th Anniversary Party. I left early to teach Yoga but it was lightly attended as the party went till 9:30. Light out at 10 PM.

Up early again and off to ride about 40 miles back to Palatka. Todays ride was very pleasant but I was really having butt pain and overall tiredness from the tour. It was one rest stop at a time till we got back to the long term parking area. Nancy and I rode together and stopped for a few pictures. At the end we had some time to shower and pack up, turn in the rental bike and then have a great soul food style BBQ Ribs with all the fixin's and dessert. Nancy dropped me off at the train station which was only 45 min late this time. I got on the train and rode the 17 hours back to DC. In Jessup GA it started raining and rained all the way back home. It rained all day Sat and Sun turned to some sleet and snow in the DC area. I slept a lot. Next year the tour may be in Sarasota FL. I hope I can go again. 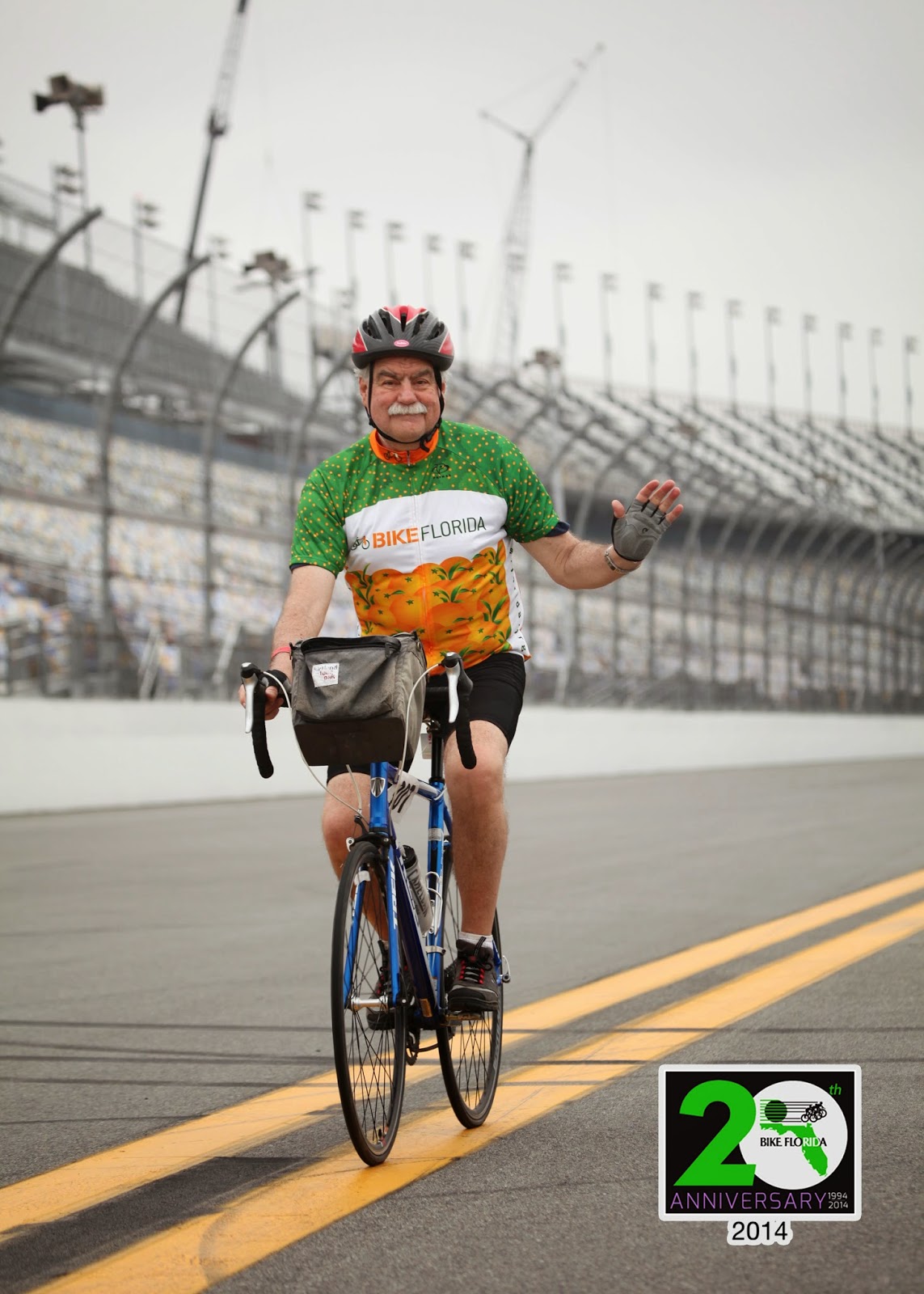 Posted by Paul Gerhardt at 4:09 PM No comments: Links to this post

Not too much time spent on this one.  Ten meters was very active it was good to hear lots of stations on.  I did have a feedline issue on the R7 Vertical which was somewhat frustrating.
Posted by Paul Gerhardt at 11:36 AM No comments: Links to this post